The vaginal ring is a small, soft plastic ring containing oestrogen and progestogen that you insert into your vagina for 21 days. It's about 4mm thick, and 5.5cm in diameter. 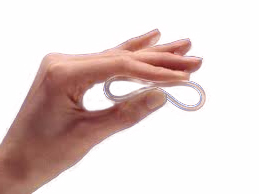 You place the ring in your vagina on the first day of your period, remove it 21 days later and throw it in the bin (not down the toilet) in a special disposal bag. Seven days after removing the ring, you insert a new one for the next 21 days.

How does it work?

The ring releases synthetic versions of oestrogen and progestogen, the hormones that are naturally released by the ovaries.

This can stop ovulation (the release of an egg). It also thickens the mucus around your cervix, which makes it harder for sperm to get through, and thins the lining of the womb so that an egg is less likely to implant there.

How effective is it?

> One ring will last for a month, so you don't have to think about it every day.

> It doesn't interrupt sex because you can have sex with the ring in place.

> The ring is still effective after vomiting or diarrhoea.

>The ring may help premenstrual symptoms, and bleeding is likely to be lighter and less painful.

What else should I know?

> Some women have temporary side effects, for example, more vaginal discharge, breast tenderness and headaches.

> A few women develop a blood clot (thrombosis) when using the ring, but this is rare. The ring should not be used by women who've had a blood clot in a vein or artery, or women who have heart or circulatory problems, including high blood pressure.

> The ring shouldn't be used by women over 35 who smoke or who have stopped smoking in the last year, or by women who have severe migraine with aura (pre-warning symptoms), or are overweight.

> Sometimes, the ring can come out on its own (expulsion), most likely after or during sex, or if you're constipated. If it does, rinse it in warm water and reinsert it as soon as you can. Provided it’s not out for over three hours, you're still protected against pregnancy. If it's out for more than three hours, talk to your doctor or nurse as you might be at risk of pregnancy.

The vaginal ring doesn't offer protection against sexually transmitted infections (STIs). Protect yourself against STIs by using condoms as well as the ring.